Our Rittenhouse Square Shakespeare store in Philadelphia  is presently closed.
We are looking for a new Philadelphia location.
Call 212-772-3400 with any questions.

Force: What It Means to Push and Pull, Slip and Grip, Start and Stop (Hardcover) 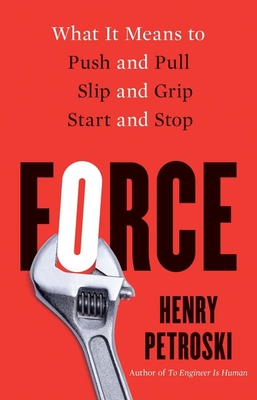 On Our Shelves Now

An eminent engineer and historian tackles one of the most elemental aspects of life: how we experience and utilize physical force

“Another gem from a master of technology writing.”—Kirkus Reviews

Force explores how humans interact with the material world in the course of their everyday activities. This book for the general reader also considers the significance of force in shaping societies and cultures.

Celebrated author Henry Petroski delves into the ongoing physical interaction between people and things that enables them to stay put or causes them to move. He explores the range of daily human experience whereby we feel the sensations of push and pull, resistance and assistance. The book is also about metaphorical force, which manifests itself as pressure and relief, achievement and defeat.

Petroski draws from a variety of disciplines to make the case that force—represented especially by our sense of touch—is a unifying principle that pervades our lives. In the wake of a prolonged global pandemic that increasingly cautioned us about contact with the physical world, Petroski offers a new perspective on the importance of the sensation and power of touch.

Henry Petroski is the author of nineteen previous nonfiction trade books, including The Pencil and The Evolution of Useful Things, which consider the invention, design, and cultural significance of common objects. He is a distinguished professor emeritus at Duke University.

“[Petroski] reveals how integral the work of engineers is to our society. The stories assembled are entertaining and often illuminating.”—William Gurstelle, Wall Street Journal

“Petroski is a vivid writer who enlivens potentially tedious descriptions of the forces at play in routine activities with sensory detail. . . . I admire Force for its attempt to immerse readers in the forces shaping our lives.”—Matthew Diasio, Science

“Petroski [is] a rare engineer whose writing delights general readers. . . . Another gem from a master of technology writing.”—Kirkus Reviews

“Henry Petroski’s poetic prose pairs psychology with physics, producing a joyful joining of fact, fun, and physics. His exploration of the many meanings of force informs while it delights.”—Don Norman, author of The Design of Everyday Things

“Force! From John Keats to Isaac Newton, from pizza boxes to the Forth Bridge, this is a veritable cornucopia that will intrigue and inform the curious reader about a concept often taken for granted.”—Paul Jowitt, professor of civil engineering systems, Heriot–Watt University

“Henry Petroski clearly and accessibly explains the most important idea in classical physics and engineering: the concept of force. His vivid prose illustrates the many ways in which forces enter and influence our everyday lives.”—Howard A. Stone, Princeton University

“Henry Petroski is a true polymath with a superbly holistic perspective. Force is a unified field theory of almost everything, exploring the interdependencies among everyday forces and their effects. Albert Einstein would have loved it.”—Peter G. Neumann, chief scientist, SRI International Computer Science Laboratory

“Force is yet another masterful and even more expansive demonstration of Henry Petroski’s uncommon capacity for demystifying science and engineering and engaging the public broadly. It is a tour de force!”—Ron Latanision, Shell Professor of Materials Science and Engineering (emeritus), Massachusetts Institute of Technology