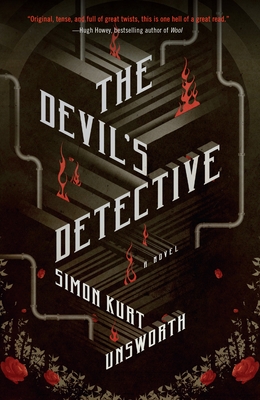 By Simon Kurt Unsworth
$16.95
On Our Shelves Now

Hell's detective, Thomas Fool is sent by the Hellish Powers to investigate murders that coincide with visits from Heaven's delegation.  The deeper he digs, the higher the stakes and the body count.  And what he discovers will shake the foundations of Heaven and Hell.

Something is changing in Hell.

A man is found dead, murdered in a horrific manner--even by Hell's standards--and he is merely the first of many. Unfortunately, these deaths coincide with a political visit from a Heavenly delegation, so the pressure is on Thomas Fool, an Information Man, to track down and identify the murderer. It's critical that Fool solves these crimes, but how can he find a killer in a place where murder is common currency?

With no memory of his past but an irresistible drive to discover the truth, Fool will follow the trail of clues straight into the heart of a dark and chaotic conspiracy. A revolution is brewing in Hell . . . and nothing is what it seems.

Simon Kurt Unsworth was born in Manchester and lives in a farmhouse in Cumbria, in the United Kingdom. He is the author of many short stories, including the collection Quiet Houses. The Devil's Detective is his first novel.

“Original, tense, and full of great twists, this is one hell of a great read.”
—Hugh Howey, author of WOOL

“A grand, nightmarish page-turner that will have you riveted no matter how much you'd prefer to look away.”
—Kirkus Reviews

“This might be the most whimsical murder story ever told. The Devil's Detective is relentlessly creative, fearlessly witty, and completely twisted. Naturally, I loved it.”
—Chelsea Cain, bestselling author of One Kick

“A clever spin on the traditional police procedural. . . . We’ve seen other novels set in Hell, but we haven't seen a Hell quite like this.”
—Booklist

“Dark and luminous, compelling and insidious, The Devil’s Detective is a novel that transcends genre.”
—Michael Marshall Smith, bestselling author of The Intruders and The Straw Men

“Hell as the setting for a noir investigation turns out to be as fun as it sounds in The Devil's Detective.  Inventive and pacy, Simon Kurt Unsworth has created a world—underworld?—distinctly his own.”
—Andrew Pyper, author of The Demonologist and The Damned

“Inventive and intriguing—Unsworth turns a journey through Hell into a heavenly read.”
—Alison Littlewood, author of A Cold Season

“A layered, fascinating first novel that will put readers firmly in mind of Clive Barker as they indulge in the gorgeous detail of Hell and all of its squalid denizens. The Devil’s Detective is an ambitious yet accomplished piece of work that will leave the reader not only wanting more Thomas Fool but hoping against hope that the reality of Hell isn’t anywhere near as bad as the version in Unsworth’s imagination.”
—ThisIsHorror.co.uk