Our Rittenhouse Square Shakespeare store in Philadelphia  is presently closed.
We are looking for a new Philadelphia location.
Call 212-772-3400 with any questions.

Democratic Justice: Felix Frankfurter, the Supreme Court, and the Making of the Liberal Establishment (Hardcover) 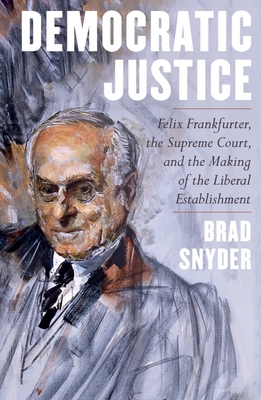 The conventional wisdom about Felix Frankfurter—Harvard law professor and Supreme Court justice—is that he struggled to fill the seat once held by Oliver Wendell Holmes. Scholars have portrayed Frankfurter as a judicial failure, a liberal lawyer turned conservative justice, and the Warren Court’s principal villain. And yet none of these characterizations rings true.

A pro-government, pro-civil rights liberal who rejected shifting political labels, Frankfurter advocated for judicial restraint—he believed that people should seek change not from the courts but through the democratic political process. Indeed, he knew American presidents from Theodore Roosevelt to Lyndon Johnson, advised Franklin Roosevelt, and inspired his students and law clerks to enter government service.

Organized around presidential administrations and major political and world events, this definitive biography chronicles Frankfurter’s impact on American life. As a young government lawyer, he befriended Theodore Roosevelt, Louis Brandeis, and Holmes. As a Harvard law professor, he earned fame as a civil libertarian, Zionist, and New Deal power broker. As a justice, he hired the first African American law clerk and helped the Court achieve unanimity in outlawing racially segregated schools in Brown v. Board of Education.

In this sweeping narrative, Brad Snyder offers a full and fascinating portrait of the remarkable life and legacy of a long misunderstood American figure. This is the biography of an Austrian Jewish immigrant who arrived in the United States at age eleven speaking not a word of English, who by age twenty-six befriended former president Theodore Roosevelt, and who by age fifty was one of Franklin Roosevelt’s most trusted advisers. It is the story of a man devoted to democratic ideals, a natural orator and often overbearing justice, whose passion allowed him to amass highly influential friends and helped create the liberal establishment.

Brad Snyder is a professor of constitutional law and twentieth-century American legal history at Georgetown University Law Center. In addition to his legal scholarship, he has written for Politico, Slate, and the Washington Post. He lives on Capitol Hill in Washington, DC.

[Democratic Justice] is a well-timed defense of Frankfurter’s hands-off approach to judicial review at the Supreme Court, and more broadly tells the stirring chronicle of Frankfurter’s life as a supremely engaged citizen of the United States. . . . The judicial restraint championed by Frankfurter has its virtues, and Mr. Snyder’s biography ably articulates them.

Impressive.... One of the many virtues of Snyder’s book is the wealth of detailed evidence he provides for each of his assertions.
— Jed S. Rakoff, United States District Judge for the Southern District of New York - New York Review of Books

Superb.... Deeply researched and written with authority, Snyder’s book examines virtually every aspect of Frankfurter’s career and, despite its length, remains wonderfully readable and accessible.... A monumental account of a life in public service, Democratic Justice is welcome reading for our troubled time.

A magnificent and indeed definitive biography of a vitally important but highly imperfect justice.
— David J. Garrow, Pulitzer Prize–winning author of Bearing the Cross and Liberty and Sexuality

For years people interested in constitutional law and US history have missed a comprehensive biography of Felix Frankfurter, in his time the most influential figure in constitutional law and an important contributor to progressive thought and politics. Finally we have one.… This is a major achievement that deserves to be widely read.
— Mark Tushnet, William Nelson Cromwell Professor of Law Emeritus, Harvard Law School

The conventional wisdom is that Felix Frankfurter was a liberal lawyer who became—surprisingly—a conservative justice. Brad Snyder’s spellbinding biography brilliantly revises this understanding to present Frankfurter as a champion of democracy in his day—and for our own as well.
— Laura Kalman, Distinguished Research Professor, University of California, Santa Barbara

Felix Frankfurter was one of the most significant figures of the American twentieth century.… Brad Snyder has given this protean man the major biography he has long deserved. Democratic Justice is vivid, meticulous, and irresistibly absorbing.

Exhaustively researched, gracefully written, persuasively argued, and historically grounded, [Democratic Justice] enriches our understanding of American democracy, politics, jurisprudence, and the liberal establishment.… One comes away from a reading of this book with a profound and renewed admiration for Felix Frankfurter and the obligation to reexamine his steadfast adherence to what he believed to be the limited role of an appointed judiciary in a liberal democracy.

— David Nasaw, author of The Last Million and The Patriarch

[A] multidimensional portrait.... The book’s prodigious research impresses, offering valuable insights into the deliberations and power plays behind landmark cases and major legislation. This is the definitive biography of a towering judicial figure.
— Publishers Weekly, starred review